History at Loreto College is an academic subject rich in powerful knowledge of global, national and local events which have shaped the political, social and cultural world around us. The pursuit of History at Loreto College broadens our students’ understanding of the complexity of people’s lives, the process of change over time and its links to modern society as well as unravelling the diversity within society and the relationships between different groups. We believe that powerful knowledge of History ensures that students are given the opportunity to become more confident, creative, resilient and critical thinkers. Through the critical evaluation of contemporary sources and historians’ interpretations, students will be given the opportunity to pose their own questions about History and formulate their own opinions. Students will be equipped with second-order historical concepts; these will not only allow them to explain, analyse and understand the past, but will also allow them to develop transferable skills, helping them to become well-rounded individuals.

The curriculum in Year 7 and 8 is mainly Anglocentric, focusing upon developing students’ understanding of the development of Britain and how power changed in Britain over the course of the past thousand years. At the same time, there is a close focus on how developments and changes in other cultures had a direct effect on developments in Britain. They will gain insight into the forces that motivated and influenced society since the Middle Ages and how specific “turning points” and “triggers” led to gradual or sudden change. A study of Islamic civilisation/the Crusades and the British Empire develops pupils’ understanding further in the need for mutual respect and tolerance for different faiths and cultures. Our study of the British Empire and industrialisation takes into account the interconnection between the Empire, the slave trade and the Industrial Revolution. The Year 9 curriculum has a greater focus on international History and how much the conflicts and upheavals of the twentieth century affected both modern Britain and the modern world. We end Key Stage 3 with an overview study of the impact of immigration to Britain during the past millennium. Throughout Key Stage 3, pupils will develop their understanding through constant use of the second-order historical concepts.

The GCSE course develops students’ understanding of a variety of periods and enhances their skills further in the processes of History; we focus upon a study of the Cold War up to 1972 and a Depth Study of twentieth century USA in order to enhance their understanding of the present day conflicts and issues. A study of changes in medicine and health in Britain since 1000AD develops pupils’ skills in analysing and assessing long-term change and continuity in History, while a further Depth Study of Elizabethan society allows pupils to gain more precise understanding of how English monarchs and the political elite reacted to change and threats at the beginning of the “modern” era.

Post-16, we build on students’ ability to analyse and assess how different European societies in the Early Modern period changed and how rulers and leaders reacted to political and religious change through a study of Stuart Britain 1603-1702, The Reformation in Europe 1500-64 and the Golden Age of Spain 1474-1598.

Themes of PSHE are covered both implicitly and explicitly in the History Curriculum, mainly focusing on the development of our modern political institutions and encouraging pupils to see themselves as future citizens who will continue to uphold the goals of Mary Ward.

How and why did power begin to change in the Middle Ages?

Islamic civilisation and the Crusades

Year 8: How far did Power, Religion and Ordinary lives change in Britain 1485-1900? How did international contacts affect Britain?

How much did England change under the Tudors?

The Renaissance and Reformation will be briefly studied briefly to contextualise the changes that took place in Henry VIII’s reign onwards.

How much did power and beliefs change during the Stuart period?

Did the benefits of the British Empire outweigh the negative aspects?

Industrialisation 1750-1850: did change lead to improvement for everyone?

How much had power moved to the people by 1900?

Year 9: How did international conflict change Britain and the world?

Europe and the First World War

Britain and the Second World War

Nazi Germany and the Holocaust

This consists of two exams; there is no coursework or controlled assessment. This is summarised below.

2A Britain: Health and the people: c1000 to the present day

Non-Exam Assessment (NEA: up to 4,500 words): A European Society in Change

Extra tuition and seminar sessions are offered to students applying to read History at Oxbridge or Russell Group universities.

Want to find out more about History work skills, then check out this infographic poster, which can also be found on the Maths corridor. 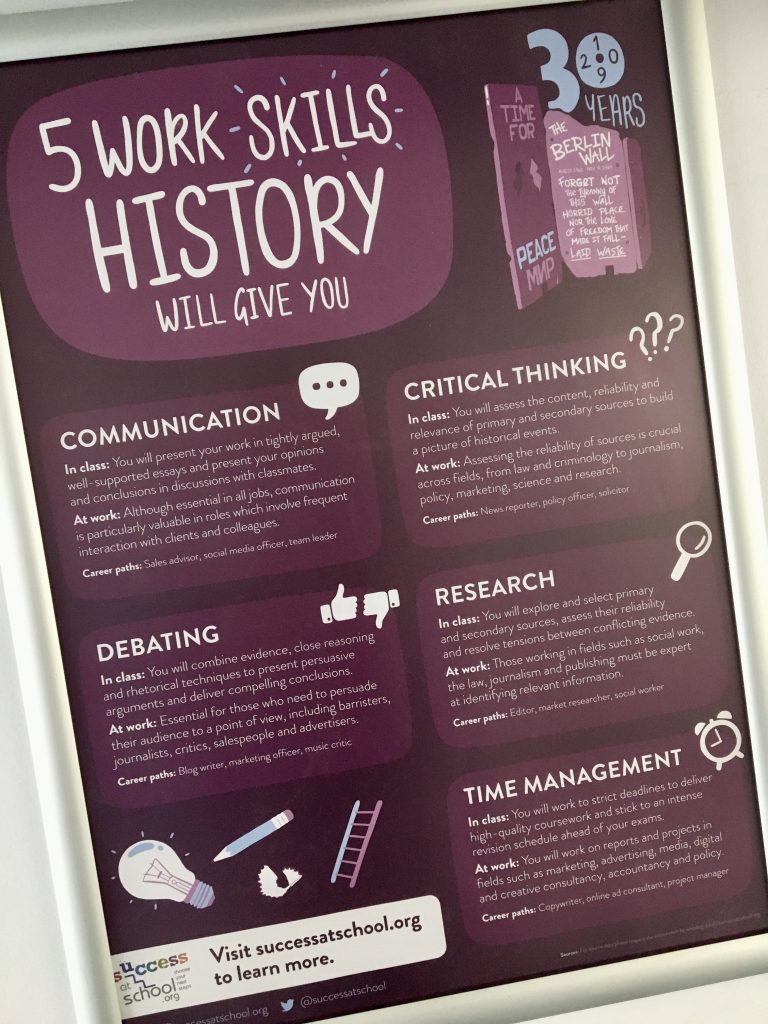