30 girls from Year 9 participated in a Story Creation Workshop led by storyteller Wilf from Readathon. He told the girls they were working in the Creative Industries as a writing team for Netflix.  Where authors work alone (one author = one novel), TV and film writers work in teams often of up to 12 people.  Story creation, he pointed out, is a collaborative process which can be frustrating as your ideas might not be the ones chosen. One director Wilf knew gave up directing films and started writing books as he wanted to be in complete control!

Wilf explained that stories start with a character. Who is their character?  The girls brainstormed ideas after Wilf talked them through some archetypal characters.  They voted and the winner, by a large majority, was Billy the Rat. 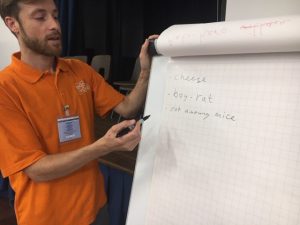 Wilf then asked ‘What is the problem the character faces?’  All stories have a problem he explained.  What is it that makes Billy different?  The girls put forward many brilliant ideas and voted on the top three:

The orphan storyline won, getting over 50% of the vote.

Wilf also spoke about ‘genre’.  What genre is the story?  He was very insistent that once the genre was chosen, the rules for the genre had to be obeyed, since they were writing professionally for Netflix.  The winning genre was a kid’s story in the style of a Pixar-like animated feature.

Where is their story taking place?  Suggestions were:

The girls decided upon Loreto.

Unfortunately, then the bell went and the session had to end…  Although, they hadn’t finished their story, Wilf reminded them that a lot of the imaginative labour is done in the discussion phase.  After an hour, the girls had the following:

Billy is a big awkward rat, adopted by wild mice living in the grounds of Loreto who have to steal their food from humans to survive but those same humans hunt them.  One day Billy gets separated from his mice companions and…

Each class will now decide how to take the story forward, fitting it into the format Wilf outlined.  Wilf has promised to publish all five stories on his website!