20th Sept 2016 – Everyone will be aware that Mother Teresa was canonized at the start of this month.  This brought particular joy to the Loreto sisters as they celebrated the achievements of this incredible woman who originally joined the Loreto convent in Dublin in 1928.  From there she was sent to Calcutta in 1929.  After her Profession of Vows was missioned to Loreto Convent Entally (in Calcutta), she taught Religious Studies and Geography there for fifteen years before being appointed Principal. 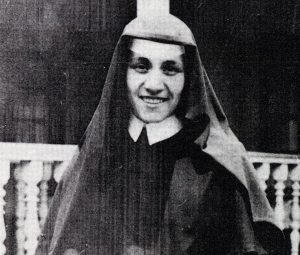 Mother Teresa as a Loreto nun in India.

On a train journey to Darjeeling in September 1946, Mother Teresa heard the voice of God telling her to go out into the slums of Calcutta to serve him by tending to the poorest of the poor.  She left the Loreto sisters and formed her own order, The Missionaries of Charity.

Pope Francis has declared that St Teresa defended the unborn, sick and abandoned, and shamed world leaders for the “crimes of poverty they themselves created”.  Her life reflects the type of Church that Pope Francis is keen to build: one that shows mercy to all and offers practical help for all those in need, especially the poor.

Mother Teresa’s ties and friendship with the Loreto order remained strong, and she frequently visited Loreto communities, particularly in Calcutta.  Many of the orphaned babies she  rescued subsequently attended the Loreto school where Mother Teresa herself had taught.

On the 150th anniversary of Loreto’s foundation in India, Mother Teresa wrote that “Although now I am a Missionary of Charity, deep down that Loreto joy is still there. Nothing can separate me from the love and gratitude I have for Loreto; what I have received will never be forgotten.”

After her death in 1997, Mother Teresa was buried in the Loreto convent Chapel in Calcutta.  People who knew her during her years in Loreto found her a pleasant, happy woman with a good sense of humour.  She was enthusiastic and diligent, but more than anything she was a woman of deep faith and prayer, and she remains a source of inspiration to us all.

More on Mother Teresa’s connections with the Loreto Order can be read here.