15th July 2020 – Our annual Drama Festival was not to be thwarted by the lockdown! Taking the lead from the other great theatrical institutions of our country, Loreto looked to technology as a means of protecting our proud dramatic heritage. The challenge was thrown down to all key stage three students to produce something to entertain, to inspire and to lift the spirits … and this challenge was emphatically taken up! The inter-form competition was fired-up rather than dampened by the need to adapt performances to the medium of film, and the students were certainly successful in proving that “all the world’s a stage” – quite literally – as they took to the highways and byways to seek out suitable film sets!

The best film in each year group wins its maker a family ticket to the largest open-air cinema in the UK! Three films are being shown every day at Hatfield House up until 2 August. On some days, the open-air cinema is a drive-in one, and on others it’s a picnic event. Films include such classics as Dirty Dancing, La La Land, Clueless, Moulin Rouge, The Lost Boys, Emma, Mission Impossible, The Secret Life of Pets, Ralph Breaks the Internet, The Smurfs, and Jurassic World. There’s also a wide range of food and drink available including pizzas, popcorn, ice creams, smoothies and cocktails. To learn more about this event, click here. 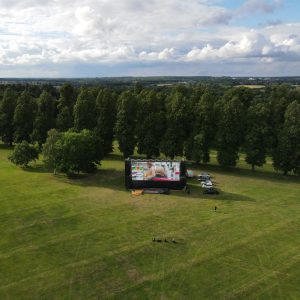 Form groups had the challenge of adapting a poem into a theatrical performance and, after much deliberation, the awards for the competition categories are as follows:

Congratulations to you all! Your films were fantastic!

But, of course, the most important award in the Loreto Drama Festival is for the best performance given by a tutor group. This year, we combined the collective scores for all of the winning films, with double-weighting given to the Best Film.

The winning Year 7 tutor group in the 2020 Loreto Drama Festival is:

7 Justice – well done to all of you for your inspiring efforts!

In Year 8, students were given the challenge of promoting the products that they created as a part of the school’s Excellence Week activities! From perfume that makes you perform to pens that make you stupendous, there was a wide range of ingenious invention brought to the table! Either through the guise of a YouTube influencer or via a promotional interview with the product’s inventor, students had to create a piece of drama that inspired and they certainly rose to the task with all the same vigour as their Year 7 counterparts.  Here are the awards:

Very well done to you all!

However, the most important award in the Loreto Drama Festival 2020, Best Year 8 Tutor Group, goes to …

Last but by no means least, we have Year 9, whose experience in all matters dramatic certainly shone through in this most competitive of fields! The standard of performances was phenomenal and the level of technical expertise displayed by some, truly professional. Like Year 8, the challenge was to promote their products, developed during Excellence Week, but Year 9 had the task of creating a television advertisement or a press conference in which to market their weird and wonderful creations! The awards were as follows:

You were all superb! Congratulations!

You can see the ‘Best Film’s for each year group on this page. Films by some of the other winners will be sent to you all via email. If you wish to write a review, to be published in next year’s school magazine, please do look out for an email from the English Department with further instructions. Many thanks!

Finally, all that is left for us to do is to wish you all a fun-filled and safe summer holiday from the English Department!